Gaza - Little media coverage for this one 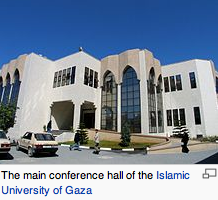 (Khaled Abu Toameh  - Gatestone Institute)
The world often thinks of Gaza, home to 1.4 million Palestinians, as one of the poorest places on earth, where people live in misery and squalor.
But according to an investigative report published in Asharq Al-Awsat, there are at least 600 millionaires living in Gaza. The report also refutes the claim that Gaza has been facing a humanitarian crisis because of an Israeli blockade.
Mohammed Dahlan, the former Palestinian Authority security commander of Gaza, said last week that Hamas was the only party that was laying siege to Gaza; that it is Hamas, and not Israel or Egypt, that is strangling and punishing the people there.
Read more about this problem in Rebirth: www.rebirthofisrael.com
Posted by Crystal Clear Hearing Aids at 11:11 AM