Early this morning, four rabbis were murdered in Jerusalem as they gathered for morning prayers. The attackers left behind bibles and prayer shawls soaked in Jewish blood. The victims left behind 24 fatherless children. Our prayers are with the victims' families.

This was a premeditated act of terrorism. The attackers -- two cousins from East Jerusalem -- entered the synagogue when they knew it would be filled with worshippers and began shooting and hacking while shouting" Allahu Akbar" -- Allah is great. The Popular Front for the Liberation of Palestine has claimed credit for these murders. And Palestinians in Gaza have been dancing in the streets and handing out sweets to celebrate the bloodshed.

According to the terrorists' relatives, they killed the rabbis to protest what Israel is doing on the Temple Mount -- the place where the First and Second Temples stood and which is now the site of two important Muslim mosques. But what exactly is Israel doing on the Temple Mount other than exercising surprising restraint? Israel liberated this site -- the holiest site in Judaism -- in 1967. Yet in deference to Muslim sensibilities Israel has allowed a Muslim Authority -- the Waqf -- to continue governing the Temple Mount. And in further deference to Muslim demands every Israeli government including the current one has forbidden Jews from praying at the Temple Mount. Non-Jews are merely allowed to visit in small groups.

These events should demonstrate an important fact about Israel's conflict with her neighbors: sometimes restraint is not rewarded. And sometimes, the truth just doesn't matter. Murderous grievance can flow from complete myth or pure hate. The Christians being crucified, beheaded and murdered by similar Muslim extremists throughout the middle east have fallen to the same evil.

This article was taken from Christians United For Israel's news source.
Posted by Crystal Clear Hearing Aids at 3:49 PM No comments:

New Tensions on the Temple mount...

Act of War or Act of Freedom?

Last Wednesday an assassination attempt was made on the life of prominent Israeli activist, Rabbi Yehuda Glick. Glick has a long history of advocating for Jewish prayer rights at the Temple Mount.

Glick is the spokesman for a group called the Joint Committee of Temple Organizations and he was in serious condition after being shot following a conference in Jerusalem Wednesday.

The shooting took place at night outside the Menachem Begin Heritage Center, located near the Old City. A motorcyclist drove up and asked if he was Yehuda Glick. When Glick affirmed his identity, the motorcyclist shot him and fled.

Abbas’ rhetoric has grown increasingly militant and harsh in recent months. Indeed the Palestinian leader seems to have decided to abandon all pretense of moderation. This incident is only the latest in an ongoing, organized campaign by Palestinian militants to drive Jewish People off of the Temple Mount once and for all.

Of course, students of biblical prophecy and long-time friends of Jewish Voice Ministries will not be surprised to see the Temple Mount becoming an increasingly thorny and incendiary issue.

In fact, one of our key missions here at Jewish Voice is to keep you apprised of world developments that have prophetic significance.

So, continue to pray for the peace of Jerusalem. And please keep your connection to Jewish Voice strong.

If you can share a gift of support for our diverse outreaches, please do so now using the “Donate” button below. Thank you!

To the Jew first and also to the Nations,

New film about Israeli youth in the IDF... 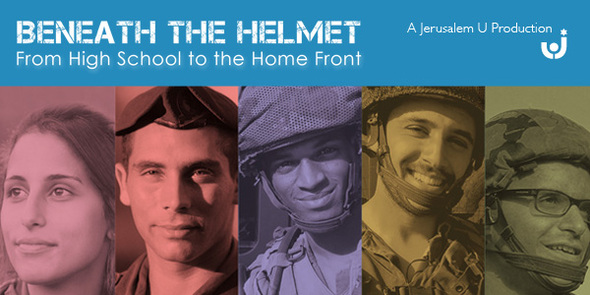 Beneath the Helmet: From High school to the home front, the new film by Jerusalem U, is this season’s must-see movie. Given unprecedented access, the film goes behind the scenes of the IDF to tell an inspiring coming of age story of five Israeli soldiers.

Posted by Crystal Clear Hearing Aids at 5:53 PM No comments: