The latest social media that landed on Twitter included a photo of female Israeli Air Force combat pilots standing by their fighter jets. The item pointed out that there are more women F-16 pilots in Israel than there are women car drivers in Saudi Arabia. 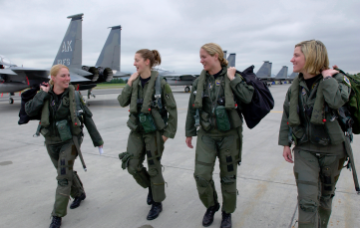 That’s true, of course. Women are forbidden to drive in that Islamic kingdom, whereas women in Israel participate fully and equally in every facet of Israeli society — including military defense.

The second was a report that noted Israel currently produces more new business start-ups than Japan, India, Korea, or the United Kingdom. It also pointed out that there are now more Israeli companies listed on the NASDAQ stock exchange — the exchange dominated by technology companies — than any other nation on Earth other than the United States.

There is no escaping the fact that the tiny nation of Israel represents a remarkable island of Western Civilization values and modernity — floating in an increasingly turbulent sea of medieval barbarism. Is it any mystery why her neighbors ceaselessly work to destroy her?

Please remember to pray and support this nation that is surrounded by many hostel foes.

This excerpt was taken from Jewish Voice Ministries: www.jewishvoice.org
Posted by Crystal Clear Hearing Aids at 4:26 PM No comments: