President Barack Obama last night phoned Prime Minister Benjamin Netanyahu, urging him to keep up his efforts to start negotiations with the Palestinians, and to support Secretary of State John Kerry who has been investing in this project. This despite the fact that the Palestinians were practicing business as usual by demanding Israel to give up East Jerusalem, Judea, Samaria and the Golan. 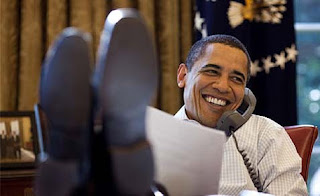 On Thursday, Amin Maqboul, secretary-general of Fatah’s revolutionary council, said Israel’s rejection of the 1967 borders (That Obama decided to tell Israel to do, then reneged as flack came from much of the civilized world) as the basis for negotiations signaled that Israel had no intention of stopping settlement building in “Palestine.” So they’re rejecting the whole thing.
Not good enough for Obama and Kerry, who spend so much time and effort on their obsession with the 2-State thing, you’d think their office maps of the Middle East plans don’t include key spots like Egypt, Syria, Turkey and Iran.
It was suggested yesterday that the only reason Palestinian Authority Chairman Mahmoud Abbas was willing to join the talks without preconditions was because he was promised that he’d get all his conditions shortly after the start of the talks.
Kerry on Thursday extended his sixth visit to the region, saying he was hoping for a breakthrough on direct negotiations. He had met with Abbas in Jordan for two rounds of intensive talks on Tuesday and Wednesday.
Maqboul told the Ma’an news agency on Thursday that Palestinian leaders had already reached a consensus with Kerry that for talks to resume, Israel must agree to negotiate on 1967 lines—and then release an unspecified number of Palestinian prisoners with Jewish blood on their hands, and stop settlement building. There’s been a de facto settlement freeze in place for at least two years now, but the Arabs want something in writing, and they want it now.
All in all, it's the same old thing...
(Article taken from the Jewish Press)
Posted by Crystal Clear Hearing Aids at 5:01 PM No comments: