Sirens blare in my head. Realizing this is not a drill, I jump out of bed and dash to the closest bomb shelter. Within seconds, the room fills with American, Canadian and Israeli students, all here in fear for their lives. Boom one, that was close...boom two, that was closer...wait for it...boom three. We wait to hear the booms because, ironically, that's the most calming sound. That's when we know that the bombs have landed and we are momentarily safe.

I refuse to be afraid, for that is the terrorists' goal. But I cannot deny that every time that siren goes off, my heart drops. This happens not only with the air-raid siren, but also with any remotely similar sound; we all jump. Sometimes we hear the screaming sirens from the cities around us. After making sure the sound is not ours, we go outside to watch and see if Iron Dome will catch the rockets this time. It boggles my mind how crazy this situation is. America would never allow this to happen at its borders. Imagine if Mexico were bombing San Diego! The writer, 18, is spending the year at Yeshivat Kerem B'Yavneh in Israel, about 25 miles north of Gaza.

This story is so consistent with my research for "Rebirth" it didn't surprise me; But it still saddened me.
www.rebirthofisrael.com  Please tell a friend about this compelling pro Israel novel.
Posted by Crystal Clear Hearing Aids at 6:35 PM 4 comments:

The conversation about Israel continues...

Posted by Crystal Clear Hearing Aids at 5:04 PM No comments:

My typical conversation about Israel...

Here is what Rebirth's research is doing on a regular basis:

A conversation with an anti-Israeli Facebook commenter: Damian Clogher said:
You know, the U.S. stopped funding UNESCO for acknowledging the existence of Palestine. Now all those poor children in Africa will starve because Israel can't tolerate Palestinians being recognized as a country. I remember that on another page, you said once that Palestinians wanted to be ruled by Israel...I'm sure that's why they asked to be recognized by the U.N., right? And now that it's given to them, the U.S. will stop funding to the agency that recognized them (UNESCO). It's getting really sad, now...taking the aid away from the billions of people who need it because you believe that you are "God's chosen people".

Dave Longeuay: More people from Israel and the USA give more money to Africa than any other nation in the world. You obviously don't know about Israel's intensive research and support to stop Malaria in Africa? It's incredible what Israel is doing in Africa. Here's the news that most news stations will NOT tell you:http://www.wallstreetdaily.com/2012/01/18/anti-malaria-from-tobacco/ Oh by the way; Israel is Malaria free. They have NO reason to help prevent such a terrible virus except for humanitarian aid... Where was Palestine when Israel was on the scene with aid for the Japan and Indonesia tsunamis? If you Google how many humanitarian acts Israel has done verses ANY Arab nation, the results will startle you!
Israeli Team Produces Anti-Malaria Drug From Tobacco Plants | Wall Street Daily
www.wallstreetdaily.com
The tobacco plant is helping Israeli scientists advance anti-malaria drug resear...See More

Dave Longeuay: Also, the term "God's Chosen People" in the bible ONLY refers to the fact (and this is a fact) that Jews were "Chosen" to write from God's dictation, preserve and deliver God's redeeming message to all of mankind;The bible. A book that has out sold any other book in world history. So the misunderstanding that Jews are more "special" than everyone else is simply false. The bible is clear that God loves ALL peoples equally and is no respecter of any individual over another.

Gaza - A Proxy of Iran

Speaking at a special session of the Knesset Wednesday on the escalation in Gaza rocket fire, Prime Minister Netanyahu said: "The dominant factor that motivates these events in Gaza is Iran.
Where do the missiles come from? Where does the money come from? Who trains the terrorists? Who builds the infrastructure? Who gives the orders? It all comes from Iran."
"Some people say that a third- or fourth-rate terrorist organization is acting against a million citizens in the State of Israel. That is not true. Iran is operating against us....The terrorist organizations in Gaza - Hamas and Jihad, as well as Hizbullah in Lebanon - are taking shelter under an Iranian umbrella. Now imagine what will happen if that umbrella becomes nuclear."
"Wherever we withdrew, Iran entered. We withdrew from Lebanon, Iran came in. We withdrew from Gaza, Iran came in. Some people suggest that we act in a similar manner in Judea and Samaria [the West Bank]. Iran will come in there too....If we come to an agreement with the Palestinians, we must ensure that our security foundations are sound and that Iran cannot enter the territory."
"Our enemies must know that, at the end of the day, Israel will not accept an Iranian base in Gaza. Sooner or later, Iran's terror base in Gaza will be uprooted."
(Prime Minister's Office)
Please tell a friend to visit Rebirth's website: www.rebirthofisrael.com
Posted by Crystal Clear Hearing Aids at 10:30 AM No comments: 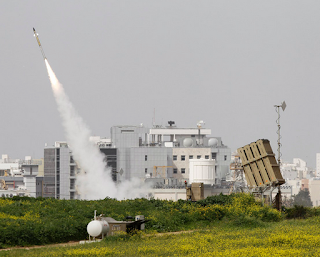 (David Horovitz  - Times of Israel)
Read more about Israel's incredible survival at: www.rebirthofisrael.com
Posted by Crystal Clear Hearing Aids at 11:50 AM No comments:

I hope they are serious about this. How many times does one have to ask Iran to cooperate and stand down with their nuclear programs? Isn't the message clear from Iran? Their answer is no! And their message is quite clear: Death to America and Israel...


Posted by Crystal Clear Hearing Aids at 10:40 AM No comments: