You didn't know did you?

Rebirth specializes in many fascinating under publicized events that formed the most controversial nation in history! 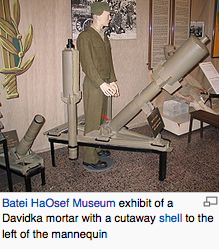 1. Jewish ingenuity: The Davidka was a bomb that did very little damage, but it's massive blast was so loud and intimidating that the Jews (who were out numbered by about 100:1) had to create something brilliant to divert the enemy away from their secret underground military headquarters. So when the enemy was getting too close, they'd set off a Davidka to send them running in the opposite direction.

2. Did you know the Dead Sea Scrolls vanished when Israel was decimated by the Romans in AD 70? Miraculously, they were rediscovered (Nov/1947) within months of Israel's rebirth! A 1000 year older copy of God's Word was gone when Israel vanished and was and found when Israel was prophetically reestablished. The Dead Sea Scrolls validated our current bible by showing how a 1000 year older document was 98% exact, word-for-word. The other 2% was only a slight variance on emphasis, not on content.

3. More Jewish ingenuity: To over come impossible odds, the Jews desperately needed more ammo than they could smuggle into Palestine during their battle with the British and Arabs for their statehood. Since the British ruled Palestine after WWII and hindered thousands of Jews from entering their "Promised Land" the Jews had a very difficult time of defending themselves from the hostile Arabs in the region. So they constructed an underground bullet factory right under the British to manufacture over 40,000 rounds per day to keep up with the battles they were fighting for their survival. Watch the History Channel video about this incredible "illegal" factory: http://www.rebirthofisrael.com/#!1948---images A death penalty would be imposed on any Jew caught making bullets or weapons in Palestine during British rule.