When was the last time you thought about fleeing
to your nearest bomb shelter? 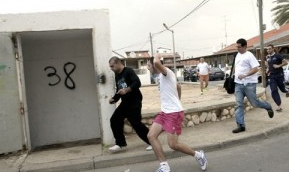 Can you imagine instructing your children to flee to a bomb shelter for the next [expected] rocket attack? This unsettling fear must instill a lot of unrest for children and adults! This type of daily fear is hard to imagine for people in America.

The Israeli Defense Force (IDF) has released the rocket attack statistics for 2019:

A total of 1,295 ROCKETS were fired at Israeli civilians from terrorists groups of nearby Gaza in 2019. Of those, 88 rockets smashed into populated civilian areas, and 729 landed in open fields. The other 478 rockets were intercepted by their Iron Dome defense system, which is similar to our Patriot anti-missile technology. However, fallout from these interceptions caused a downpour of metal on the heads of Israelis, which can be deadly too.

Thanks to donors worldwide, the shelters provide security and peace of mind to thousands of threatened Israeli communities. These shelters have saved lives from the 566 rocket attacks and shrapnel that struck populated areas just this year alone.

But more shelters are needed since citizens of Israel usually have a few minutes of notice to take cover.

Song For Israel continues to support this great and widely unknown effort. They have supported Israel with FIVE bomb shelters and have raised over $2,500 toward their sixth one. As Iran has recently threatened Israel with their intent to attack with more bombs, more shelters are needed. To contribute to the Bomb Shelter campaign, please click here:    Song For Israel Donations for Bomb Shelters
Posted by Crystal Clear Hearing Aids at 6:38 PM